These aren't your bucket and sand variety! 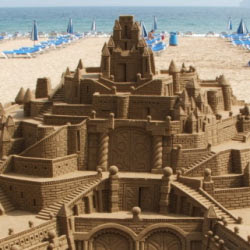 If chicks ruled the world 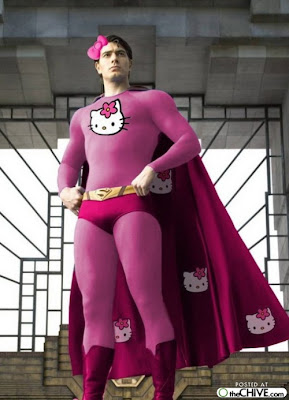 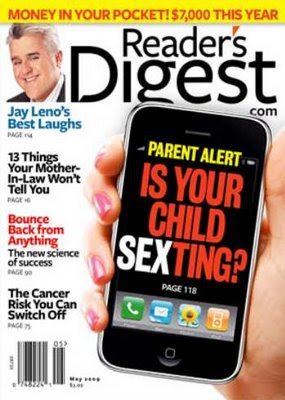 This is an amazing article about how brain can regenerate and change according to our thoughts. Unlike before neurologists used to look at the brain as just a dumb machine, but it's not, since being of the organic nature, it can produce new neurons to connect to new patterns, even enable functions that were dead before. This is exactly what Yoga has been talking which is now a recognized fact by modern science. Read on...

On a fine day in September 1995, Howard Rocket, a hard-working 48-year-old entrepreneur, leaped for a pass in a friendly football game in Toronto, Canada. He slipped and fell, hitting the back of his head, and a minute later came to with an awful, ever worsening headache. Then, dark spots floated into his field of vision. He ignored these things until three weeks later, when he was home alone and suddenly lost control of his arms and legs. A sharp, deep pain pierced his head and darkness closed in. He groped his way to the phone, slowly tapped the emergency number, then collapsed.

Rocket's brain had been attacked by 'a basilar thrombotic stroke, in which a clot blocks blood flow to the brain stem. This kills most people, but Rocket was saved by doctors who injected him with a clot-busting drug. In the days that followed, though, their prognosis was grim: Rocket would never regain the use of his left arm, leg or foot. His muscles were fine, but the parts of his brain that directed them were seriously damaged. In other words, he'd better get used to a wheelchair.

Determined to prove the doctors wrong, Rocket began rigorous physiotherapy. If he made his left foot move over and over again, he figured, eventually the undamaged cells of his brain would find a way to tell the foot what to do. After he learnt to stand, he strapped his left foot to the pedal of a stationary bike at the gym, then started pedalling. On the first day, he lasted only 30 seconds—but he persisted. It was like doing sit-ups for the brain. Twelve years later, after thousands of hours in the gym, Rocket danced on both feet. His doctors were amazed. "It was dramatic," says Dr Robert Willinsky, the neuroradiologist who saved Rocket's life with the clot-buster. "He's a poster child, for sure."

It turned out Rocket's hunch was right: It is possible to retrain your brain to make up for the part that's out of order. A generation ago, that idea was dismissed as folly by most medical practitioners. They thought the adult brain was like a machine: It couldn't change or grow; all it could do was break down. But over the past few decades, brain scans such as the PET and functional MRI (fMRi) have allowed scientists to observe this organ Ln action. Now they can see that the conventional thinking about the brain was wrong.

If one part of tin' brain is injured, especially the cerebral cortex (the outer layer, which processes the signals for perception and movement), often another part can he trained to take over. It takes diligent practice, sometimes over years. But scientists tell us that thinking and engaging in activity can physically alter the brain, a concept they call "neuroplasticity." "We now know that when we have thoughts, we rewire the so-called hardware in our brains," says Toronto psychiatrist Dr Norman Doidge.

And from these physical changes come functional changes. In his book, The Brain That Changes Itself, Doidge writes, "I met a scientist who enabled people who had been blind since birth to begin to see; another who enabled the deaf to hear. I met people whose learning disorders were cured and whose IQs were raised; I saw evidence that it is possible for 80-year-olds to sharpen their memories to function the way they did when they were 55. I saw people rewire their brains with their thoughts, to cure previously incurable obsessions and traumas." These changes were brought about by repeated mental exercise.

In other words, thinking can change the way the brain works.

University of Wisconsin neuroscientist Richard Davidson demonstrated this very theory with his experiment on meditation—a prime example of "mental sit-ups." He measured the brain activity of novices/and highly practised Buddhist monks, and found that, unlike the novices, when the monks meditated on "unconditional loving-kindness and compassion," they generated powerful gamma waves— the type involved in higher brain processes like perception and consciousness. Thus, the repeated mental activity of meditation altered brain functioning

Meditation can also have a powerful effect on how we deal with physical sensations like pain. Melissa Munroe, a former national-champion bodybuilder, learned at age 30 that the egg-size lump in her throat was Hodgkin's lymphoma. Her condition was so advanced that her doctors told her, "You have cancer everywhere, from your head to your toes," and gave her three months to live. She chose to fight, but the pain from the tumours pressing on her organs was excruciating, even for an athlete accustomed to pushing her physical limits. So she turned to a psychiatrist, Dr Tatiana Melnyk, who taught her how to use her mind to ease the pain.

Pain is a physical sensation, Melnyk explained to her, but Munroe's emotional response to it was amplifying it. So Melnyk advised her to focus only on the physical aspect of the pain: "Don", judge it; just sit with it," she said.

By thinking in this disciplined way, Munroe could manage the way her brain dealt with the sensation of pain: She'd feel it but wouldn't be controlled by it. "It was something I was experiencing," she says, "but it wasn't me. Defining the pain helped me to compartmentalize it and therefore not be overwhelmed by it."

Munroe defied the odds: Thanks to intensive chemotherapy—including a dose so heavy that she collapsed in her apartment and was revived with CPR by her sister—as of 2006 she was cancer-free after six years. And she still practises meditation.

How, exactly, can repeated thoughts or activities alter the brain? For one, they can affect DNA. Research, mostly done in the 1980s and 1990s, shows that thinking, learning and acting can turn our genes on or off. No one knows for sure how this occurs, but, Doidge states, "when you think thoughts repeatedly, you turn on genes to make proteins that change the structure of the neurons and increase the number of connections between brain cells." In essence, neurons become better communicators.

The brain can also produce new neurons. In his lab at Canada's University of Lethbridge, neuroscientist Bryan Kolb demonstrated this ability in rats by bringing on strokes to cause brain damage. He and his colleagues showed that if growth factor was given to the rats, their brains could not only make new brain cells but could also use these cells to help rebuild the physical and functional aspects that were damaged. And the researchers made another stunning discovery: In the two weeks following injury, a rat's newborn brain cells migrate to the damage site and wait for orders. If these cells are properly stimulated, they can start functioning and help the brain regain its ability to do things—such as direct a leg to lift.

Kolb's work underlines just how important rehabilitation is for the injured brain. Now scientists are investigating whether the stimulation that rehab provides might increase the production of new brain cells and speed up recovery.

One of the brain's "neuron nurseries" is in the hippocampus, which plays a key part in memory function. In one study, scientists at the University of Toronto used chemical "tags" to trace naturally occurring newborn brain cells in healthy mice, then taught the animals to swim to a platform. After plenty of practice, the mice "remembered" where the platform was. When the scientists later examined the animals' brains, they found that the new brain cells had been recruited for the memory task—that is, the chemically tagged newborn cells were concentrated in the hippocampus "nurseries."

And they found that newborn brain cells started boosting memory after only one month. According to Paul Frankland, the Toronto neuroscientist who led this research, studies show that the environment affects how many new brain cells arise. Cocaine and stress, for instance, cut the rate of neuron creation; running and educational activities increase it.

What the scientific world calls "neuroplasticity," 21-year-old Ian Bradley calls "hope." When he was in the seventh standard, he couldn't yet read and his spelling was standard four level. "I thought I was a dummy," he says. His mother, Mary, pushed him through elementary school by spending four hours a night reading textbooks to him and writing down his answers to homework questions.

Then Bradley's father discovered Arrowsmith School. Its founder, Barbara Arrowsmith Young, was at one time a student with profound learning disabilities that made it hard for her to understand what she was reading or what people were saying. So she devised mental exercises to help retrain her brain—and overcame her disabilities. She then developed more of these exercises to help others with learning dysfunctions; the Arrowsmith program is now offered in schools across North America.

Bradley spent three years at the school in Toronto, doing cognitive exercises such as tracing letters and matching symbols, over and over again. "It's so tiring, it just kills you," he says. But by the end, he could read at a standard eight level. And, recently, he passed high school, his performance having improved so much that he got a distinction. He is aiming for a career as a pilot. "Before, life was so bleak," he says. "Now the sky's the limit, literally."

New discoveries about the brain give tremendous hope to many: victims of stroke dealing with the loss of brain function, those struggling with chronic pain, young people with learning disabilities. "We are just scratching the surface of the mechanisms through which the brain can change, and how areas of the brain can take on new responsibilities," says Dr Andres Lozano, the neurosurgeon who helped to save Howard Rocket's life.

Now doctors and researchers are beginning to understand that the go-getter entrepreneur Howard Rocker was right, after all. Repeated exercises—mental and physical—can change your brain. And your life. 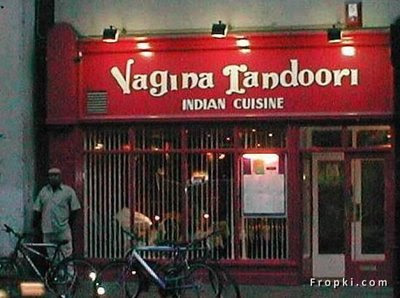 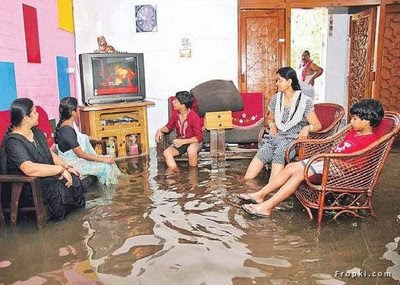 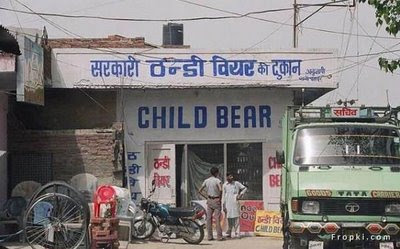 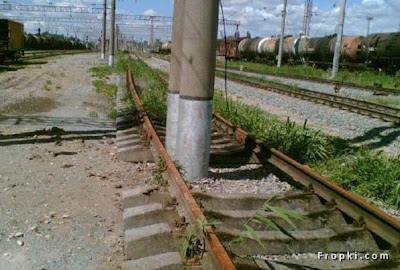 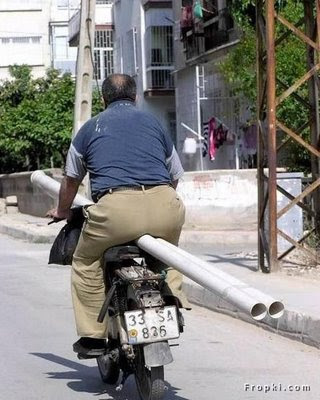 This doesn't look Indian from the license plate, nevertheless very Indian-like attitude, must a photo from Asia somewhere.
Posted by nikrusty at 2:40 pm 0 comments

A friend forwarded this email, it's hilarious!

Pic 1: It takes years of practice to do this asana. 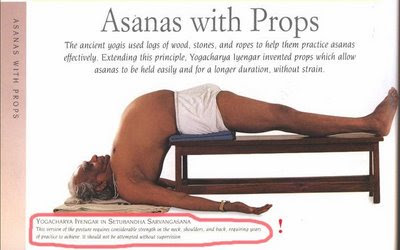 Pic2: It takes only 8 pegs of whiskey to do the above asana. 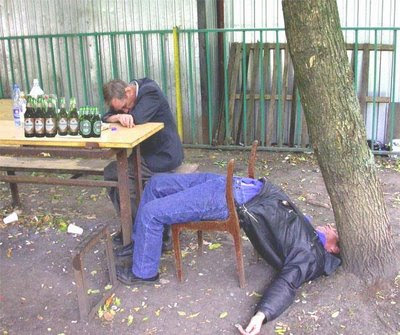 Posted by nikrusty at 2:29 pm 0 comments 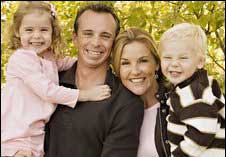 This is a typical case of dhaapping (copying) images from the internet (don't we all). But think twice about what you do with them. Here is a restaurant owner Mario Bertuccio, whose Grazie shop specializes in Italian food imports, straight off took a family's photo from the internet and used it for his shop advertising. A friend of theirs got quite a shock when he spotted a life size photo of his friends plastered on the shop billboard. 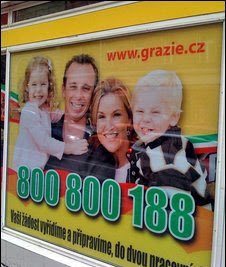 So two lessons to learn here kids...
1. When copying copy smart (I know I'm writer...lol)
2. When posting images online be a little careful you never know where it'll end up.