India - Culture of self interest


Hobbesian (culture of self interest)


Corruption in India is a cultural aspect.

Indians seem to think nothing peculiar
about corruption . It is everywhere.

Indians tolerate corrupt individuals
rather than correct them.

No race can be congenitally corrupt.
But can a race be corrupted by its culture?

To know why Indians are corrupt ,
look at their patterns and practices.

Religion is transactional in India.
Indians give God cash and anticipate
an out-of-turn reward.
Such a plea acknowledges that
favours are needed for the undeserving.

In the world outside the temple walls,
such a transaction is named- “bribe”.

A wealthy Indian gives not cash to temples,
but gold crowns and such baubles.

His gifts can not feed the poor.
His pay-off is for God.
He thinks it will be wasted
if it goes to a needy man.

In June 2009, The Hindu published
a report of Karnataka minister
G. Janardhan Reddy gifting
a crown of gold and diamonds worth
Rs 45 crore to Tirupati.

India’s temples collect so much that
they don't know what to do with it.
Billions are gathering dust in temple vaults.

When Europeans came to India they built schools.
When Indians go to Europe & USA, they build temples.

Indians believe that if God accepts money for his favours,
then nothing is wrong in doing the same thing.
This is why Indians are so easily corruptible.

Indian moral ambiguity towards
corruption is visible in its history.

Indian history tells of the capture of cities
and kingdoms after guards
were paid off to open the gates, and
commanders paid off to surrender.

This is unique to India.

Indians' corrupt nature has meant limited
warfare on the subcontinent.
It is striking how little Indians have actually
fought compared to ancient Greece and modern Europe.

The Turks’ battles with Nadir Shah
were vicious and fought to the finish.

In India fighting wasn't needed,
bribing was enough to see off armies.

Any invader willing to spend cash
could brush aside India’s kings,
no matter how many tens of thousands of
soldiers were in their infantry.

Little resistance was given by the Indians
at the “Battle” of Plassey.
Clive paid off Mir Jaffar and all of
Bengal folded to an army of 3,000.

There was always a financial
exchange to taking Indian forts.
Golconda was captured in 1687
after the secret back door was left open.

Mughals vanquished Marathas
and Rajputs with nothing but bribes.

The Raja of Srinagar gave up
Dara Shikoh’s son Sulaiman to
Aurangzeb after receiving a bribe.

British bribed Dogras to defeat the Sikhs
by promising Dogra General Gulab Singh
and appointing him as the Maharaja of
Kashmir.

There are many cases where Indians
participated  on a large scale in
treason due to bribery.

Question is: Why Indians have a
transactional culture while
other 'civilized' nations don't?

Indians do not believe in the theory that they all can rise
if each of them behaves morally, because that is not
the message of their faith.

Their caste system separates them.
They don't believe that all men are equal.
This resulted in their division and
migration to other religions .

Many Hindus started their own
faith like Sikh, Jain, Buddha
and many converted to
Christianity and Islam.

The result is that Indians
don't trust one another .

There are no Indians in India, there are
Hindus, Christians, Muslims and what not.

Indians forget that 500 years ago
they mostly belonged to one faith.

This division evolved an unhealthy culture.
The inequality has resulted in a corrupt society,

In India every one is thus against everyone else,
except God and even he must be bribed.

(The interesting read was sent via email) 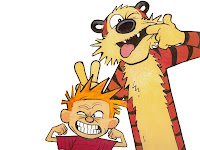 For those wondering, Calvin and Hobbes creator Bill Watterson was highly influenced by Hobbes' philosophy and therefore the comic cat character Hobbes was given the name. You can see similar thought provoking ideas in his cartoons at the official site. 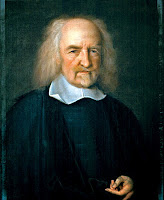