Hope Is Not a Budgeting Strategy

A fantastic article on the difference between “hoping for positive change” and actually “working at positive change”. Carl Richards blog is worth a read. The original link is at the bottom.


Hope Is Not a Budgeting Strategy 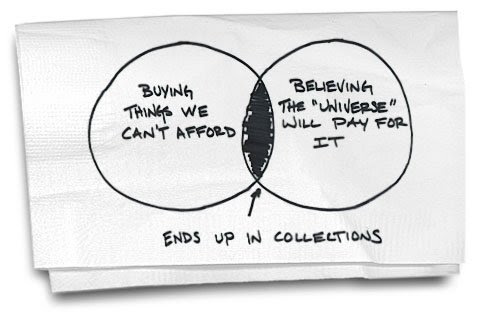 Carl Richards
Carl Richards is a certified financial planner in Park City, Utah. His sketches are archived here on the Bucks blog, and other drawings are available on his personal Web site, BehaviorGap.com.

Maybe you’ve already learned the truth the hard way, but the universe is not going to pay for that BMW you want.

In case you missed it, I’m referring to one of the teachings from the best-selling book that goes by the ingenious name “The Secret.”  The premise relies on the law of attraction. The idea is that you can create your own reality through your thoughts. If you focus intently enough on something, it will happen.

Most of us believe in some version of this law because we recognize that thinking good thoughts will generally make us happier and more attractive to other people. We also see some logic in the fake-it-until-you-make-it strategy. After all, how many of us are really qualified for the jobs we apply for?

Where “The Secret” takes us off track, however, is in telling us that changing our physical reality only requires us to will it to happen. This attitude gets particularly dangerous when applied to money.
Using positive thinking to motivate ourselves to make healthy financial decisions is one thing. It’s something else entirely to lease a BMW you can’t afford and hope that the universe will make your payments because you thought about it really hard.

Maybe this sounds silly to most of you, but I see something similar happen on a regular basis. It starts out simple enough. I’ll see someone who believes that getting to the next level, however they define it, requires faking it at an unsustainable level using material goods as part of the ruse.

For example, think about the people you know who believe that more expensive clothes or a flashier car will help them appear more successful and thus lead to closing more deals. The real question is whether there’s anything to back up the flash, like hard work, patience and discipline.

There is indeed some evidence that focusing on the positive does bring about positive change in our lives, both at work and at home. But the positive change happens and lasts because of hard work. And that’s the part left out of “The Secret.” If it were all about thinking, we’d all be billionaires. Instead, when we apply the law of attraction to our financial lives, it’s important to realize that patience and discipline over long periods of time make the biggest difference.