Here’s a great reminder why not to trust history written by humans completely and to imagine we and current generation of kids are learning the same nonsense. Take History with a pinch of salt I say!

Every second Monday in October, we celebrate Columbus Day in honor of the day Columbus “discovered” America. Without a doubt, it was a great accomplishment for 15th century Europeans and everyone likes a good holiday.

But is what we teach kids about Columbus the truth? Was the man we celebrate worthy of celebration? Columbus was an interesting dude, but what you think you know might be completely untrue. And that whole world-was-flat thing? Read on. 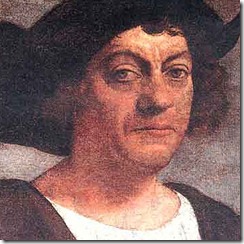 Let’s start with a simple item: his name. Columbus’ might not have had an Italian name. Instead, he might have had a Genoese name.

This actually becomes an interesting discussion of the self-referential nature of the Web. If you do a search on Columbus’ name, you’ll find that his father’s name was apparently Corombo. But if you keep digging, you’ll find that Wikipedia, referencing “Rime diverse, Pavia,” written in 1595, states that Columbus’ name was actually Christoffa Corombo.

The question is: was it? Interestingly enough, a Web search on “Christoffa Corumbo” shows a lot of references, including mainstream media reports, using that name. But there’s not a single scholarly reference to Christoffa anywhere (well, unless you consider the game Assassin’s Creed II to be scholarly).

He’s also been referred to as Christoff Columb, and a variety of other variations. The real truth is we don’t know his real name, but it was almost undoubtedly not Christopher Columbus.

2. Columbus wasn’t a great leader, he was a brutal one.

You may not know it, but Christopher Columbus (or whatever his name was), spent six weeks in jail. Eight years after landing in the New World, Columbus and his brothers were thrown into jail by Ferdinand and Isabella.

According to Consuelo Varela, a historian at Spain’s Consejo Superior de Investigaciones Cientificas and reported in the Christian Science Monitor, Columbus was a tyrant during his time as governor of Hispaniola.

He was apparently a big fan of using torture and slavery to keep his constituents in line (insert poor-taste joke about Congress here). Apparently, the level of brutality was so great that the rulers of Spain had enough, slapped him in chains, and threw him in jail.

Given that Ferdinand and Isabella were the warm, gentle folks who started up the Spanish Inquisition, you’d have to think that Columbus had to be pretty nasty to even begin to show up on their radar.

3. He didn’t think the world was flat.

We’ve all been taught that 15th century sailors thought the world was flat. One of Columbus’ biggest contributions to modern thought was the conclusion, based on his adventures, that the world was, in fact, a giant ball.

According to Paul Boller who wrote Not So!:Popular Myths about America from Columbus to Clinton, most educated people of Columbus’ day thought the world was spherical.

They weren’t sure about the size, Boller says, but the roundness was accepted and had been for centuries.

Apparently, it wasn’t until Washington Irving wrote his book about Columbus in 1828 that we all started believing that they all believed the world was flat.

Time fogs our understanding of what really happened. Archeologists and academics are hard at work trying to truly understand who Columbus was and what he really accomplished.

In the meantime, as you celebrate Columbus Day, remember that not all is as you’ve been taught, not all is as it seems, and not everything those in positions of power, authority, or influence tell you is true.

Keep that in mind when you vote next month.

Happy Columbus Day, and I’ll grill a burger for ya!